The company was founded in 2013 with planned activities that include building design, construction supervision, civil engineering and project management. Following global energy trends, in 2015, the company’s development strategy is focused on the development of new technologies in the production of energy mainly from renewable sources. During 2014 and 2015, we invest significant energy and resources in defining a new development strategy. We are creating a respectable project team that develops a number of related projects in 2015 and 2016. In search of a location that would allow the development and implementation of the concept of integrated projects in 2016, we find a place that fully meets our requirements. The selected location is located in eastern Croatia, Baranja region, or part of the entire Baranja region, the border between Croatia, Hungary and Serbia, which is called “GREEN TRIANGLE” due to green vegetation. In the beginning of 2017, we established the daughter company Green triangle international AG in Switzerland with the planned transit activities and distribution of electricity, investment and development of electricity networks, as well as the production of energy from renewable sources. During 2016 and 2017, we will conduct a series of meetings, both with the local and regional administration, and with the ministries of the Government of the Republic of Croatia. In the beginning of 2017 we get support for the project implementation, and our projects are named “GREEN.” TRIANGLE “concept of integrated projects and start their implementation. According to the strength and symbolism of the name, planned activities in the field of green technologies, we adapt the new visual identity of the company, so that by changing the name of the project we are changing the name of the company in” GREEN TRIANGLE INTERNATIONAL “. 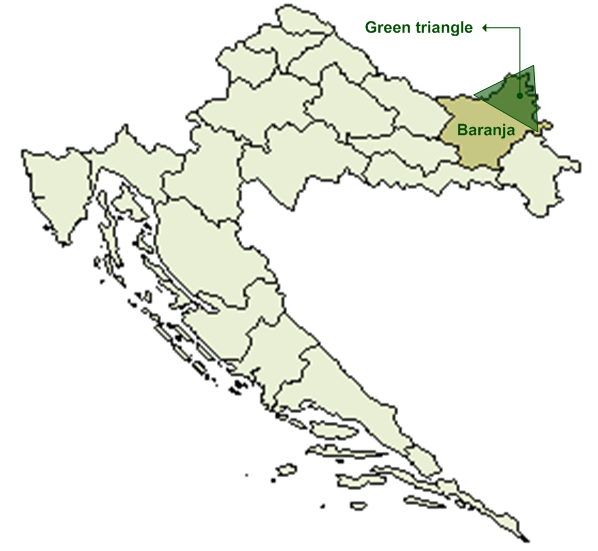 Part of the geographical unit “Baranja” of Tromeja between Croatia, Hungary and Serbia. Because of green vegetation it is called “GREEN TRANGLE”